Animation showing how a deeper understanding of communication skills could improve the performance of your projects.

Zach is a project manager and proud of it. He feels privileged to be a member of a well-trained and highly-skilled profession. After all, without project managers very little would get done.

But despite all this Zach is not a happy man. His sense of achievement is overshadowed by some well-known statistics. And, whichever way you look at them, the statistics all tell the same depressing story: Most projects are doomed to failure

In fact only one out of every eight projects is a success and almost 1/3 are cancelled before completion.

Responding to angry or unreasonable stakeholders with process thinking only fans the flames.

If project managers are going to deal successfully with people they need more than process.

Take Zach. He’s making a presentation to the senior management team. Everyone’s paying attention except Malcolm who shuffles his papers and looks bored.

Zach believes Malcolm doesn’t respect him and thinks Malcolm wants his project to fail. Zach is angry and makes a mental note to try and avoid including Malcolm in the next meeting.

Within a short time Zach has made a number of assumptions that will have a major impact on his project it can happen in the blink of an eye and Zach isn’t even aware its happening. It’s called a ladder of inference.

And what he doesn’t realise is that Malcolm is probably clambering up some rungs on his own ladder creating even more problems for the project.

Zach and Malcolm’s story illustrates why project managers need to be aware that what people think affects what they do. But thoughts are locked in side our heads they’re invisible so what can be done?

The answer is better communication skills and ChangeQuest has the solution, adding NLP skills to your make of project manager skills can ensure your next project becomes a successful statistic not a failed one.

Call us at ChangeQuest to find out more. 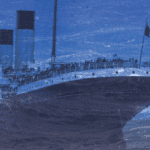 What we can learn from the Titanic CentenaryPeople Skills, Project Management