What sank the Titanic? It wasn’t just an iceberg, it was people. Leaders whom no one dared challenge, employees unable to communicate, organisations lulled into a false of security.

The lessons of the Titanic are startlingly relevant for business today, and invaluable for project managers and change managers. It’s a tale of biased thinking and poor decision making – failures flying in direct contrast to good practice.

A gripping lesson that resonates today

The sinking of the world’s most technically advanced, luxurious ocean liner with the loss of more than 1,500 lives is a fascinating and terrible human story, and the focal point of a seminar I ran last week for the APM at Friends House in London. The audience of 70+ were very engaged, and the subject clearly resonated, as this testimonial shows:

“One of those events where you ‘assume’ you know the topic, that you’ve seen it all in the news! Yet Ranjit Sidhu managed to delight, surprise and enthral me all at once. Such gripping insights, if only Netflix or BBC4 were listening. I am still thinking about it and wondering, what have we learnt as a society since then?” Sharron Escobar

What went wrong with the Titanic

So what went wrong with the Titanic? The advent of the 20th century brought huge change. It was a dynamic, exciting era with plenty of opportunities for shipping entrepreneurs eager to make money from the 1 million immigrants a year arriving in America (that’s 5,000 per day).

Harland and Wolff shipbuilders and the White Star Line were riding on the wave of a technological revolution and planned the Titanic to be the safest liner ever built. Designed with innovative safety features, the perception became rooted that she was so safe as to be ‘practically unsinkable’ (some even boasted she was ‘unsinkable’.)

But a shift of priorities, with demands that she become ever more spacious and luxurious, led to disaster. During a pre-construction review, 4 – 5 hours were spent on décor and 10 minutes on lifeboats.

The number of lifeboats was cut from 64 to 16 so they wouldn’t spoil the view, but after all, Titanic was unsinkable, so it didn’t matter – a classic error of group think. Titanic’s design was compromised, sea trials reduced to just half a day and the launch crew were completely new to the ship.

Change-management mistakes were embedded throughout. Harland and Wolff and the White Star Line were both very hierarchical: not the sort of place where challenge was allowed. There was a lack of co-operation: class divisions meant that officers wouldn’t share their binoculars with the lookouts, who didn’t see the iceberg in time. Poor communication and misunderstandings were endemic.

Poor process added to conflicting goals and a lack of understanding of priorities. When disaster struck it was so inconceivable that those at the top could not think straight and it was 65 minutes before the order was given to uncover the lifeboats.

What should we draw from this?

It is critical that project managers and leaders have the skills to deal effectively with people issues. They need to be comfortable managing conflict, communicating at every level and adapting to evolving risk. Yes, this may mean having difficult conversations, but it is people who will determine whether your project is a success or failure.

For more about biased thinking, our blog ‘Recognising Biases on your Projects‘ may be useful.

To learn more about the role of power dynamics, underlying perceptions, communication, leadership and team interactions in project and change management, contact us today. 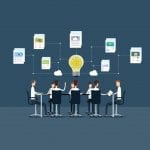 The top change challenge – who do you trust with your company’s future?Change Management, People Skills, Project Management