From very early on individuals in competitive sports are hardwired to win, they’re driven by a need to be ”top dog”, sometimes at any cost as many scandals have revealed (Lance Armstrong, Ben Johnson etc).  But if you are part of a team, an individual’s natural competitive instincts and actions can have both a positive or negative impact within a team dynamic.

Imagine being part of a rowing team and that you know you can row faster and for longer than any other team member in the boat. Is it about proving how good you are or is it about how great the team can be working together?

Businesses and organisations can also have very competitive individuals at their helm. To create truly successful working environments, great team leaders understand the critical importance of trust and collaboration when building, leading and working within, and for, the team. 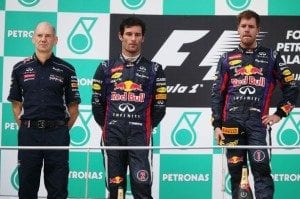 Some of you may already know Formula 1 motor racing has been a passion of mine for many years now. With the 2013 season just underway, this weekend I awoke at 4.30am eager to watch the preliminaries to Race No. 2, the Malaysian Formula 1 Grand Prix. But due to adverse weather conditions both in Malaysia and here, I instead spent the next 12 hours watching a small lake form in our garden. But that’s another story about project and risk management that I’ll tell once I know the ending.

Saturday night, our watery crisis barely averted, had me retiring early to bed, in preparation for an early rise for race day….but I overslept!

By the time I switched on the TV, the race was over but I was in time to witness the trophies and accolades being handed out to a very forlorn looking podium of ”winners”.  Something was not quite right. What had happened?  Was it a crash? Some devastating event that brings with it a sombre silence from the victors. Were we in the midst of restrained celebration out of respect to the passing of a sporting colleague?

Well no, as has happened many times before within all teams, the winning team from Red Bull Racing were having to face, and deal with, the complexities of managing a 2013 Formula 1 TEAM.

Now stay with me for a minute, you may not be an F1 anorak like me, so I want to bring you up to speed. This is a sporting business layered with competitiveness, between teams, between individual drivers and even between the drivers and their respective engineering and support teams – within the same team.

This sport has changed and evolved drastically over the last 50 years. It is no longer just a high risk motor sport. With the astronomical investments, risks and rewards involved, it is a very high risk business. A business that is in constant flux with managing change and development, with multiple concurrently running projects, and processes that are as complex as they are vast. This team business employs and relies on the skills of hundreds of professionals that all bring their individual expertise, commitment and dedication to the team. There are teams within larger teams ultimately managed by a Team Principal who in turn is held accountable to the Team’s stakeholders.  It is a business with a very clear directive and hierarchy for objective success.

At the end of the season, in addition to the financial gain from purse winnings and sponsorship deals for the winners, there are 2 major accolades up for grabs, one for the team which brings recognition for their technical excellence in design, engineering and management, and the other for the individual driver offering personal glory and fame for becoming World Champion (Think the wearer of the Yellow jersey in the Tour-de-France).

But to achieve this overall success, the teams’ and drivers’ objectives are to ensure that their cars finish as many races in the highest position possible. No team can win without the skills of truly exceptional drivers and no driver can win without the best performing team car. With the ultimate winning combination occurring when the winning team’s driver also becomes Formula 1’s World Champion.

This very symbiotic relationship, where either can only succeed  if there is absolute trust in their commitment to one another and that any strategies agreed or instructions given on behalf of a team whether right or wrong  (as has been many times in the past and will be in the future), are followed and accepted.  This means the individual may have to overcome ego and sacrifice self-importance to ensure that trust and team solidarity is maintained.

Which brings us to the reason for the sombre looking winners and the furore that has been kicked-up since over the actions of Sebastian Vettel, who 9 laps before the finish of the race, disregarded a clear team directive not to challenge and overtake his teamate Mark Webber who was leading the race at the time.

My guess is that this is a serious issue for the Red Bull Racing Team for one reason alone. Formula 1 Racing teams abhor making the same mistake twice. In 2010 a similar competitive overtaking incident occurred between the same two Red bull racing drivers at the Turkish Grand Prix, which led to a collision between them ultimately denying the team what looked like a sure-fire 1st & 2nd place victory for that race. The team, to ensure that this could never happen again, had probably put in place a team agreement that should they find themselves in a similar position of gaining both top spots close to the end of a race, that an assessment would be made and the risk calaculated and managed, so that whatever the decision, the needs of the team would take precedence over that of an individual driver’s personal ambition.

Formula 1 drivers are all very competitive sportsmen at the top of their game and are hardwired to win, but no matter how great the driver, if team decisions are not applicable to them then they need to question their team commitment and what this could cost the team dynamic.

So what is the right decision when you have the opportunity to show off your work performance, but it may not be in the team’s best interest and could affect team dynamics and trust? 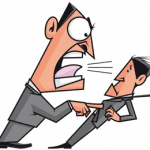 We Are Communicating But What Are We Achieving?People Skills 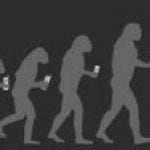 A History of Change – the Mobile Phone from Bricks to TricksChange Management, Project Management