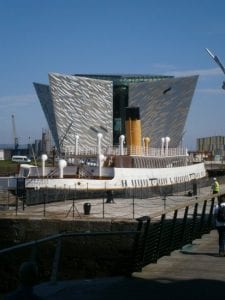 Last week Ranjit did one of her popular talks on the Titanic disaster. From what she told me, a visitor needs to hit the ground running, and be right up to speed on the dramatis personae of Belfast’s world famous historical drama.  Even the taxi driver, on the trip from the airport to the evening’s APM talk venue, confirms the popular perception of Ismay’s role as villain of the piece, saying that the Titanic was, “Perfectly fine when she left here”.

A convenient pantomime character to hiss at maybe, but it’s not quite the full story. Perhaps a perception that is an inevitable oversimplification of the myriad of complex factors, pressures and differing priorities that did contribute to the outcome of the fateful maiden voyage. Had the key players understood how best to communicate and build effective teams, then there could have been a very different outcome on that starry night in Iceberg Alley.

We might also never have had a series of cinematic blockbusters! When grumbling at the spiralling cost of making the movie Raise the Titanic, cigar chomping mogul Lew Grade is said to have opined that it would have been, “cheaper to lower the Atlantic” – but that’s another story…

Belfast is not now known as Linenopolis, the greatest exporter of that fabric in the world, not as the former industrial powerhouse which it indeed was,  nor the birthplace of George Best, Van Morrison or even Eamonn Holmes. Instead it is best known as the origin of the ship that became a byword for epic failure, disaster of such magnitude that it is known as titanic – having completely supplanted its original meaning – a five star, fur lined, ocean-going game changing disaster. A hubristic comeuppance for the “unsinkable” marvel of the age.

But Ranjit has ably deconstructed the events leading up to the tragedy in her book to describe for us the many invaluable lessons to be learned for project managers everywhere, giving us a telling, thought provoking handle on how it all could go so wrong.

Her Belfast talk took place in an evocative venue, Titanic’s restored tender, the SS Nomadic, finally come home and quayed at Hamilton Dock. The Nomadic was built with the giant profile of the Titanic towering over her – strange to think that the smaller ship is the one that survived. In her book, Ranjit talks about the role of biases, and how significant it was that the idea the Titanic was “unsinkable” became embedded in people’s thinking. From then on, there was a “confirmation bias” so that people noticed only what confirmed the way they were already thinking! We do this all the time – dangerous you think? Well, yes, but once we know we’re doing it then that the balance can be reset. I’m not the expert on that bit – you may want to ask Ranjit for more information about this, or it’s in Chapter 5 of her Titanic book.

By the way, the first class museum, cafe and gift shop in the Titanic Quarter (you’d somehow think it would be bigger) are not to be sniffed at either. And though I wouldn’t go so far as to say it matched the Titanic’s centenary commemorations, I would have to say that the talk… went down well. 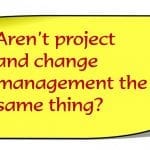 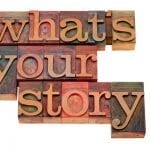 The power of storytelling during changeChange Management, People Skills