If the pace of change feels overwhelming, here’s pause for thought:

” The pace of change has never been this fast…
and yet, it will never be this slow again “

McKinsey summarised, in a key takeaway from Davos 2018, that we need to fasten our seatbelts and get ready for an even more intense wave of business transformation.

Organisations that can’t keep up with the pace of change are doomed. They can no longer sit back and see what happens. The demise of companies like New Look, Toys R Us, Jaeger and Just for Pets are just some examples showing what happens if you get left behind.

The constantly increasing pace of change can leave organisations in a state of flux. Continuous change is normal life; it is not an extra nice-to-do. We need to weave it into the DNA of the organisation so that everyone is comfortable getting on with making change happen.

The answer isn’t to keep using the same old approaches, and just doing more of the same thing to make it bigger, better, faster, more efficient. Ultimately it comes down to people – they are the ones that make change happen – or scupper it.

People can be better prepared for this faster world, by adopting a more resilient attitude and mindset around change.

Or, read on for more…

We are actually getting very good at adapting to change. Whereas it took 50 years from the launch of electricity for one in four people to be using it, the internet swept through 25% of the world in just seven years.

There are expected to be 10 million self-driving cars on the roads within the next three years. And we are more and more comfortable with automation for example at using self check-in (or self checkouts) in airports, hotels, supermarkets and petrol stations.

New smarter, faster technologies are being developed quicker –and they are being adopted much quicker.

If you still have some dusty VHS video tapes lying around the house, imagine how one day (not too far off) we will be nostalgically looking back at pictures of the smartphones we use today, or the Hoover that we push around manually.

The world is changing faster than any time in human history!

How to prepare for change

McKinsey based their findings on conversations with large, well-performing corporates from telecom to pharma, banking to energy. Across every sector, the message was the same: the radical restructuring of portfolios companies have seen to date is just a prologue – they are only getting started.

And a ripple effect spreads the impact far and wide. McKinsey found that in 75% of cases, change has an impact across multiple business functions.

The organisations I work with feel they are operating in a constant state of flux –and this has crept up on companies in just the last few years.

They are keen to be prepared for change, and they start to deploy many methods and approaches – mapping Lean, with Continuous Improvement overlaying that on Agile. We can add to the mix other organisational change models such as Kotter, Bridges, and ADKAR. It is of course very important to have up to date knowledge and skills of best practice change management approaches and build a rich tool kit. Unfortunately, there is no silver bullet, and it is not a case of doing more of the same thing, only bigger, better, faster, more efficient.

Above all, it comes down to PEOPLE.

Ultimately it’s people who will make change happen –or scupper it!

Just as you would not send your people up a mountain without preparation, so you need to equip them for change.

Some will welcome change enthusiastically (they are the ones you see waving their arms in glee at Alton Towers as the rollercoaster plunges around another vertiginous bend). Some resist even a small divergence from their routine.

But we all experience change in our lives –school, work, friends, changing jobs, taking opportunities. We embrace life-changing events, getting married, moving house, having children. Some people create change simply to make life more interesting –a different route to work, moving furniture around “just for a change”.

Even those who are more reluctant to shake things up still do it. They would not be functioning in the world if they didn’t adapt –seasons change, weather changes and our environment changes.

By helping people develop a change mindset you can get everyone on board. A change mindset is a “growth mindset”. It’s about being resilient, learning and growing –our core ethos at ChangeQuest –and keeping an open mind to possibilities. It’s about future -proofing ourselves and our organisations.

The Growth Mindset is a concept devised by Carol Dweck, Professor of Psychology at Stanford University:

The “growth mindset” creates a passion for learning rather than a hunger for approval. It can be cultivated through effort and deliberate practice. Not only are people with this mindset not discouraged by failure, but they don’t actually see themselves as failing –they see themselves as learning. This idea, of course, isn’t new. What makes Dweck’s work different, is that it is rooted in rigorous research on how the mind –especially the developing mind –works, identifying not only the core drivers of those mindsets but also how they can be reprogrammed.

You already know why this is important. If you want to keep pace with your competitors and tackle future challenges, you need to prepare your people to learn to change themselves. Attitudes affects behaviours, which affect results.
The good news is that our brains are not fixed –they can expand, grow and learn new things. Neuroplasticity allows our brains to continue to change, and this helps us stretch out of our comfort zones.

The science of neuroplasticity

In 2000, the Nobel prize for medicine was awarded for demonstrating that, as learning occurs, the connections among nerve cells increase. The scientist behind that discovery, Eric Kandel, also showed that learning can ‘switch on’ genes that change neural structure. Hundreds of studies went on to demonstrate that mental activity is not only the product of the brain but the shaper of it.

Building that confidence, building that muscle is having a “growth mindset”–learning and growing so that come what may, your people will approach it as just another obstacle to overcome. Not an insurmountable challenge to be afraid of.

If you have seen the film Hidden Figures I hope you enjoyed it as much as I did. It’s about these three ladies, who worked at Nasa in the very early 60s, in what was then still a segregated workplace:

That is the sort of workforce organisations want to create, to future-proof themselves for the pace of change that is coming.

IKEA provides another great example of willing to adapt. One day the team was packing away some furniture and a casual remark about how much space a pair of table legs took up led to a revolutionary idea: what if we were to flat-pack our products? The rest is history, but it was a unique offering at the time.

The practical ideas that follow will guide you through common change pitfalls so that you can embed the “growth mindset” for stronger people and a stronger organisation.

Communicate clearly, take the time for people to understand the situation, the immediate context, especially the WHY we need to change, and the purpose. Have you ever felt: “I don’t want to be held responsible or accountable for something that I do not agree with or don’t understand”? It’s a very natural sentiment. Understanding the point of upheaval makes it easier to engage people with that change. (Just like a driver seeing a “School” sign and understanding why the speed limit is 20mph.)

You need to create a safe environment of trust and openness so people feel safe learning and trying out new things.

Don’t follow the example of the retailer that implemented a strict new inventory system that left employees in tears. It included bi-weekly walk-throughs and random quizzing of staff to test them. Score cards were used to evaluate each employee, who felt like they were being punished. “The stress has created such a tense working environment,” a supervisor reported.

This brings us neatly to the next step.

This is how our brains react to perceived threats and rewards:

People need to have a sense of control –some autonomy to feel they can make a choice, rather than everything being imposed on them.

It is just human nature: when you sense you have choice, something that felt stressful can feel more manageable. Which approach do you prefer when you’re having your first meal in a new culture? A buffet, or “you get what you’re given.”

Finding a way to make a choice, however small, has a measurable impact on the brain. It shifts a person from a Threat response towards a Reward response.

It takes sustained effort to bring about change, so it is vital to build in the practice of continually reviewing and reflecting.
Staff will respond with invaluable insights if they are given the scope to talk about what’s going well, what not so well, and what is working brilliantly.

Just because we have a set way of doing things doesn’t mean we need to carry relentlessly on along that path. We can refine our approach and change course if necessary.

Here is another eye-opening McKinsey finding:

When people are encouraged to improve and refine what has been implemented, longer-term success is 4x more likely.

And remember to celebrate successes along the way –good news is infectious, and a powerful motivator.

Alternatively, you can listen to the webinar on Tackling the pace of change head-on. This was hosted by APMG International. 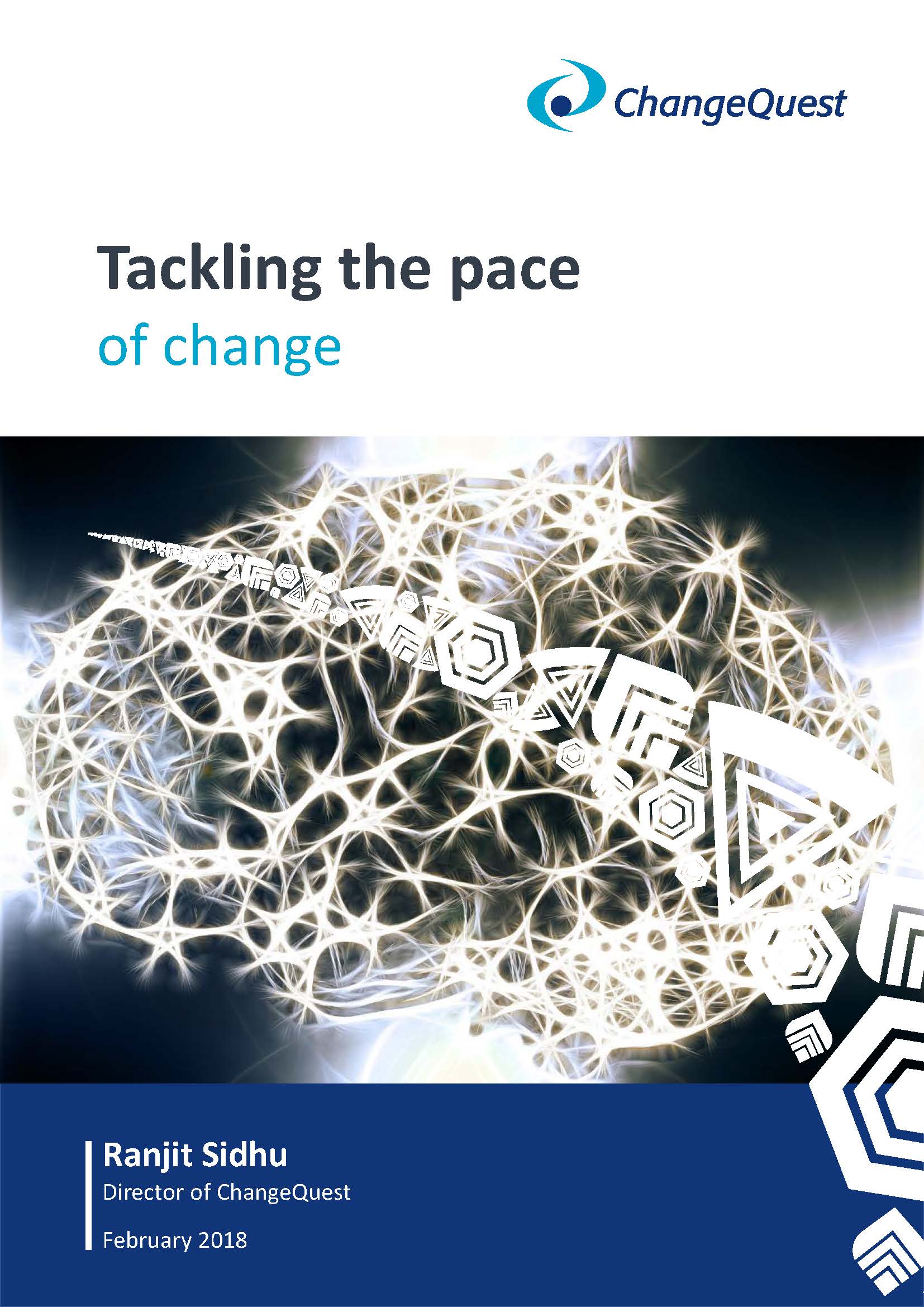